Phnom Penh, Cambodia – On April 13, 1920 Cambodians celebrated the New Year of the Monkey with the grand opening of the National Museum of Cambodia, housing the world’s most extensive collection of Khmer art. 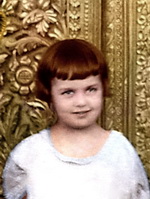 Although she wasn’t even two years old at the time, one petite French girl named Nicole has held the National Museum of Cambodia in her heart since that day…and with good reason. Her father Georges Groslier designed the museum, became its first Conservator, and devoted his life to preserving and perpetuating the art and culture of Cambodia.

Born in Phnom Penh in 1887, George Groslier was educated in France, and then returned to Cambodia in 1909. Service in WWI called him back to Europe but when the war ended he returned to his birth country with his wife Suzanne,  spending the rest of his life devoted to the arts, culture and people of Cambodia.

Nicole Groslier was born in Phnom Penh in 1918 and, like her father, has held a lifelong love for Cambodia and her people.

In 1920, H.M. King Sisowath attended the auspicious New Year’s Day inauguration of Cambodia’s first national museum, along with a host of international dignitaries. The facility was initially named for Albert Sarraut, former Governor General of Indochina. Sarraut’s political efforts gave George Groslier the opportunity to design and organize this monument to Khmer art that still today is synonymous with traditional Khmer architecture.

From childhood to maturity, Nicole Groslier would visit her father at his museum office marveling at the magical world of Khmer imagination. Nicole’s first true memory of visiting the museum is in January 1922, when she attended a special ceremony welcoming Marshall Joffre to Cambodia.

Marshall Joffre was honored by this ceremony at the National Museum of Cambodia. Nicole is standing directly in the center of the action. Photo courtesy Nicole Groslier.

Marshall Joffre became one of France’s most senior officers in World War I after replacing the popular Philippe Pétain during the Battle of Verdun in 1916. H.M. Sisowath himself then took Le Maréchal to tour the temples of Angkor.

H.M. King Sisowath took Marshall Joffre on a tour of Angkor after the museum event.

Throughout his career, George Groslier continued his efforts as museum director to catalog the vast collection and to share his appreciation for Khmer creativity with the world. These dramatic photos from Nicole’s personal archive show the museum nearly inundated by the seasonal floods of the Mekong River in the 1930s.

Two men in a pirogue paddle by the museum entrance. Circa 1934. Photo courtesy Nicole Groslier.

George and his wife Suzanne had two more children in Cambodia. First, Gilbert in 1924 and then their youngest child, Bernard-Philippe Groslier (below), in 1928. Inspired by his father, Bernard-Philippe also pursued a lifetime career focused on Cambodian history and Khmer culture.

George Groslier and his son, Bernard-Philippe, who also grew up to become a noted archeologist in the field of Khmer studies. Photo courtesy Nicole Groslier. 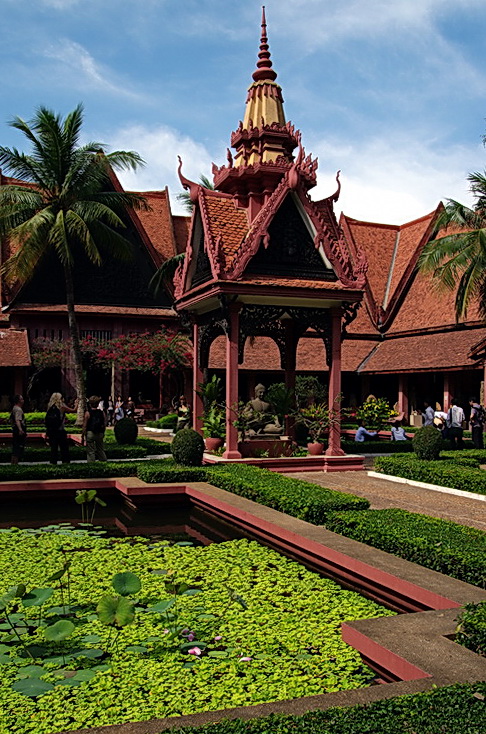 From its opening, the museum has attracted enlightened scholars whose work illuminates the mysteries and beauty of the ancient Khmer race. Jean Boisselier and Solange Thierry both added their talents to improving the museum. From 1956 to 1966, the museum flourished under the direction of Mme Madeleine Giteau, who occupied the same official residence as the Groslier family, just behind the museum. 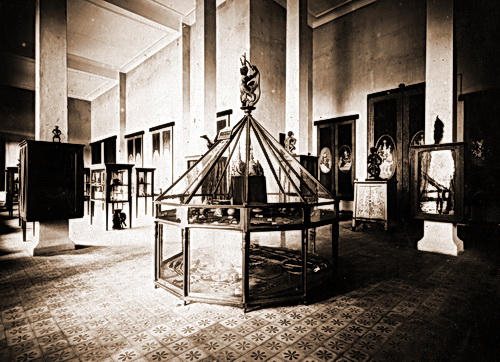 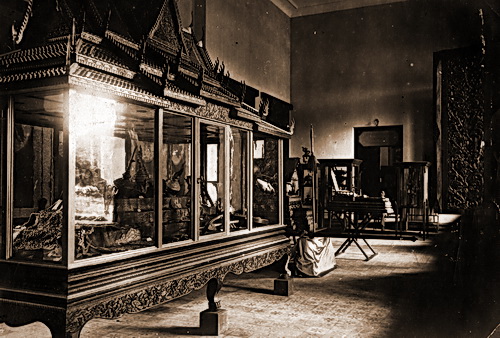 In 1966, Chea Thay Seng became the first Cambodian Director of the museum, as well as Dean of the newly created Department of Archaeology at the Royal University of Fine Arts (RUFA). At the origins of this university we find the Ecole des Arts Cambodgiens that George Groslier organized in 1920. It’s goals remain the same, to intimately link students, artisans and teachers working to preserve and perpetuate Cambodian cultural traditions.

Since Cambodia’s  liberation and the restoration of a government by the people the museum has grown under the guidance of two Directors, Khun Samen and Hab Touch. In 2010, the museum’s second female Director, Mrs. Oun Phalline, assumed this vital administrative role.

Today the National Museum of Cambodia houses one of the world’s greatest collections of Khmer cultural material including sculpture, ceramics and ethnographic objects from the prehistoric, pre-Angkorian, Angkorian and post-Angkorian periods. Its facility includes more than 5,000 sq. meters of space devoted to exhibits, restoration, offices and meeting rooms.

In 2007, the museum catalog, Masterpieces of the National Museum of cambodia by Helen Jessup was published by Friends of Khmer Culture, offering art lovers and historians worldwide the opportunity to appreciate this extraordinary collection.

Special thanks to Nicole Groslier for sharing her photographs and memories.

SOURCE : This article was by Kent Davis ( www.Devata.org ) and reproduced here with his kind permission from: http://www.devata.org/2010/04/cambodia%E2%80%99s-national-museum-marks-90th-anniversary/